If you must suffer data loss then at least make sure you collect a good story from the experience!
I believe I have such a story.
Recently, I've been enjoying keeping my inner engineer sharp by playing around with retro software and hardware. I've taken a particular interest in floppy disc drives and old-school floppy disc protection on the BBC Micro. The BBC Micro had a couple of different popular floppy drive controllers: the older Intel 8271 and the newer Western Digital 1770/1772. Both controllers have different capabilities, and quirks by the bucketload!
My data loss occurred while experimenting with the Intel 8271, a 1970s chip and design. It's a good size and runs a little hot.
There is not a lot about this chip on the internet, but there's a pretty good datasheet, which includes this description regarding the reset register: 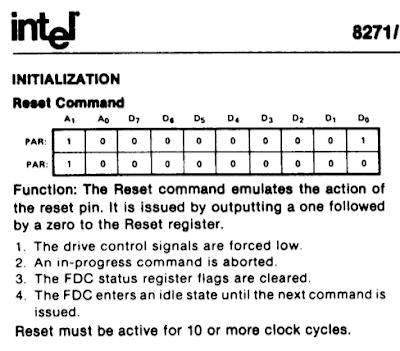 It is no doubt my security background that caused me to read this description and then promptly write the value 100 (not 1 or 0) to this register.
It is at this point that my drive became possessed. Re-trying showed that setting bit D2 alone by writing the value 4 is sufficient to cause the demonic infestation:
Different drives behave differently. This drive, an older single head Chinon F-051MD seems to activate all of its widgets: the head wobbles wildly and the motor sometimes spins. My newer Mitsubishi drive makes a terrible, awful high pitch screech. It is my favorite drive and I do not wish to hear that sound ever again so there is no video.
Here is where it gets crazy: when I first did this, there was a disc in my Chinon drive and the data on that drive became toast... despite the hardware write protect tab being present.
What?
Indeed. This is sufficiently bizarre that it is worth investigation! What signals is the floppy drive receiving when the poltergeist is present? As a reminder, the BBC Micro uses a Shugart style (not PC style!) connection to the drive: 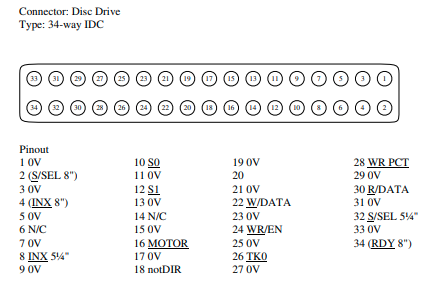 From the controller to the drive, we have Select 0, Select 1, notDIR (step direction), pin 20 (step; not labeled in the service manual diagram above), Write/DATA, WRite/ENable, Side/SELect. To sample a couple of these:
There are similar signals on other pins from the controller to the drive -- and they are not normal! Flipping the motor on and off at 375kHz is not an expected controller behavior and it may even be bad for a motor; I don't know.
The disc corruption comes from the abnormal signal above on the write enable pin. This is how the controller requests the drive to power up its write head, and the drive is being asked to do so at 300+kHz. There's also one of these crazy signals on the step and step direction pins, so the drive is seeking all over a range of tracks while being asked to activate the write head. Not good.
It is probably reasonable for us to fault the controller here. Under the heading "Write Protect" on page 8-124 of the data sheet, it says "The 8271 will not write to a disk when this input pin is active". This contract is clearly being violated as the write protect is being signaled by the drive.
It takes two to tango
But there is more to this! Most floppy drives also have a last-line-of-defense. For example, the application notes for my Mitubishi MF503B drive clearly state "This signal goes to ‘0’ when a write protected disk is inserted into the drive. Writing is inhibited even if the write gate is active." My Chinon drive seems to get this right most of the time, but not in the presence of wild oscillating signals. There appears to be a race condition -- perhaps if the drive is selected while the write enable gate is already active -- where a bit of current will go through the write head before the write protect condition is noticed.
Looks like I got unlucky -- wrong controller, wrong drive.
Intel 8271 speculation
There isn't a whole lot on the internet about the Intel 8271. It's a slightly older floppy controller chip from the 1970s. Some of its capabilities hint of design tastes and directions that were retired in the 80s. For example, the chip is able to use host memory DMA to asynchronously scan within disc sectors for arbitrary byte strings. Perhaps a relic from the mainframe era? It wasn't used on the BBC Micro. The DMA capability wasn't wired up at all.
No other 1980s home computer that I'm aware of used the 8271. There were good reasons not to. Probably most significantly, the 8271 doesn't support double density aka. MFM, which the Western Digital 1770/1772 did. So using the 8271 carried a hit on storage capacity. The BBC Micro lived with this hit even as 1770 based machines became common. Commercial software needed to work on all machines, including 8271 based ones.
One suspicion I have is that the 8271 could be based on the Intel MCS-48 microcontroller. A few things line up, such as dates of design and manufacture. But there are also clues in the API offered. The "Read/Write Special Registers" commands is of particular interest: 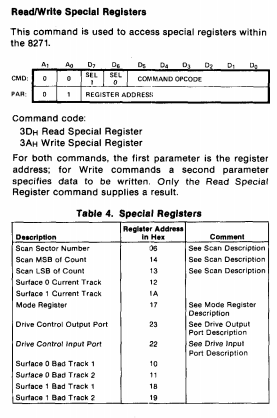 As you can see there are a lot of special registers, with a fairly sparse few documented. The highest documented index is 0x22, or 34 in decimal.
One theory would be that the read/write special register simply reads or writes one of the 64 bytes of RAM present in an 8048 (or variant). There's plenty of evidence that most special register indexes seem to do something. For example, the seek and settle timing parameters end up in special registers 0x0D and 0x0E even though it is not documented anywhere. Also undocumented, 0x1D appears to mirror the formal data register. And so on.
And if the 8048 theory holds water, perhaps the undocumented and crazy bits of the reset register correspond to one of the test modes, single step mode, or external memory access mode?
Summary
This is the most fun I've had while sustaining serious data corruption.
If you have any knowledge or memories of how the 8271 is actually architected, or details of undocumented behaviors, please get in touch!
Posted by Chris at 1:37 PM

Steve Furber talking about undocumented behaviour at the motherboard level: he misinterpreted the 8271 datasheet and flubbed the gap between the first and last sector of each track. :-)

I have a copy of Intel Peripheral Design Handbook from February 1979. Let me know if you want it. I am in Maryland.

Time for a decapsulation? :)

...and an update. The German wikipedia page on the 8048 gives a hint (albeit without a source):

Now if there was a simple way to read the ROM contents...

@armadillo reading the ROM would be epic! I bet there's some interesting flags and special register settings that will do useful things but are not documented.

@Chris The description to read the ROM I mentioned above was for a real 8041, of course. This involves applying 12V to pin 7 (EA = external access) to gain access to the ROM contents.

For other peripheral chips, such as the 8292 GPIB controller and the 8294 data encryption unit, intel officially states that these are preprogrammed 8041A's (see e.g. http://www.emuverse.ru/downloads/datasheets/other/intel/8292.pdf). On the 8292 and 8294, pin 7 is marked as a GND pin. This is correct for normal operation, i.e. EA is not used to access the internal ROM.

On the 8271, pin 7 is an input, DACK. So either the 8271 is not a relabeled 8041 or some pins have been reassigned, e.g. using a different bonding configuration. So I'm afraid one would need to take a look inside a real 8271 - a defective one would work for this. The 8271 has a variant that comes in a ceramic package, which is easier to open than plastic DIP packages, but the problem remains to find one...

It seems the 8271 contains two distinct processors and two ALUs: a fast bit processor and a byte processor with hardware task switching.

Those signals are 300Khz, I wonder what would happen if you hooked them up to an amplifier and played them through a speaker?

The 8271 was also used in the acorn atom disk pack. I am trying to revive one. Thx for the info.