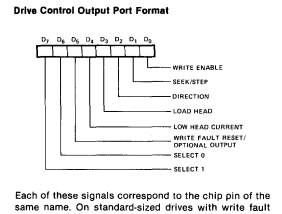 Fascinating post. I actually created my own way of creating weak bits in 1990. By 1990, some intelligent copying software tools could replicate weak bits using standard drives. I started making a small scratch on the floppy disk surface using any standard sharp paper cutter to protect my software from copying. This would remove the magnetic surface from that place, and I used to identify those tracks and then sector and embed them in my software for later verification. Since the intelligent copying software could replicate the weak bits, I would always write to those sectors before reading them back to ensure that these weak bits were not created by any software and that a physical scratch was there. This way, I protected my software till I stopped selling it.

I am a bit late in commenting. But for historical purposes...

Actually I used weak bits as one of many disk protection techniques on the atari 8 bit floppy version of Alternate Reality - The City. One of the engineers in Datasoft(Publisher of the game until we got the rights back) brought it to my intention.

What I did with it was I read the bits multiple times generating a statistical variance table to be read in a future loaded software fold(obscuring the check, but leaving my code vulnerable to TOCTOU exploits, but no one is perfect) If fuzzy bits were where they should not be or were not where they should be I would give the game character scurvy and they would die in the first few steps in the game. I did allow the fuzzy bits to be slight off
by creating a guard band of bits that should not be fuzzy but could be. In case manufacturing messed up...ohh and they did by putting the fuzzy bits at the start of the guard band instead of after the guard band, causing a few false positives in production.
Lots of other checks, multistep encrypted booter, simple deleted sector to keep honest people honest, etc.

Other techniques I used include asynchronous software folding to obscure code check on weak bits. Interrupt driven checks to launch a self relocating nop sliding memory wipe when modified roms were banked in to try to snapshot memory by hijack nmi/reset.

You always can have lots of fun being dirt poor and loving creating games and protection as I did back then.

back then no one had virtual hardware and 3rd party floppy drives were not yet the norm, so some of these techniques could work and could provide some mitigation against piracy.